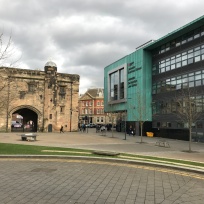 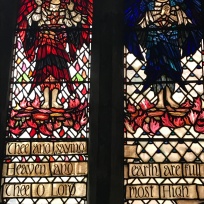 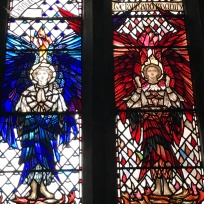 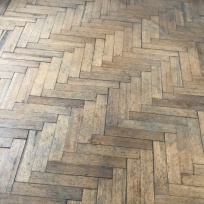 These almshouses were founded in 1331 by Henry Earl of Lancaster and Leicester and were rebuilt in 1901. The original almshouses were known as the “Hospital of Annunciation of the Virgin Mary”. They were for a warden, 4 chaplains and 50 poor and infirm people, 20 of whom were to be resident there. By 1354 the number of resident poor people had doubled to 40. The almshouse survived the dissolution and was renamed Trinity hospital in 1614. Whall executed an East window for the Chapel. (List of works by Christopher Whall)

You never know who’s looking over your shoulder.

“The Vice-Chancellor and his senior staff are delighted that you are able to join them for lunch. The lunch will take place after the ceremony in Trinity House at 12.00 for 12.20pm.”

So I sit down amongst the finery and refinery sporting my guest badge meeting with a laudable gent from the Guild of Patten Makers (inserts in shoes not templates for sheet metal) and a lecturer in photography and before you know it there’s a very decent three course meal and then someone gives a welcome speech and then I’m chatting to someone from the arts and humanities department about the cross overs between arts and science education and evaluation processes and what’s causal and what isn’t then someone points to the bread and something in a bowl next to it and we’re not sure whether it’s pate or butter and then there’s a very nice glass of wine on offer but I’m not drinking as it’s midweek and if I have a glass now I shall be out like a light and then there’s some very appetising chicken so I give the wine a miss but the elderflower cordial is pretty lovely and think I’d better get off to work as it’s a busy day and I have a meeting in thirty minutes and then I have a train to catch and then there’s loads to do and it’s fifteen minutes until the next meeting and then and then and then and then.

What I didn’t do was stop in my tracks. Turn a corner and look up at the altar at the end of the chapel. If I had, I would have seen the magnificent window by Christopher Whall, benignly staring at us assembled hoards, albeit around the corner, just feet from where I was sitting.

I didn’t have a clue who or what was looking down as this whole stained glass window thing was news to me and anyway I was far to busy to stop in my tracks this time but I should have stopped I should have done and taken it in for a few minutes how something in our past can be just around the corner out of sight but benignly present if we were so inclined to see it.

We don’t stop often enough to take stock of what’s just around the corner, wishing us all good grace and offering to be an angel in the midst of our day. And we lose out, being engulfed in the mist of our daily routines.