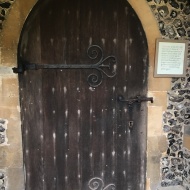 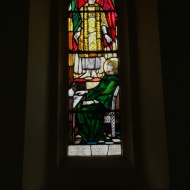 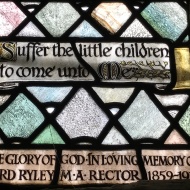 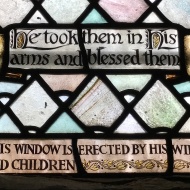 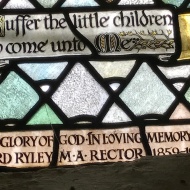 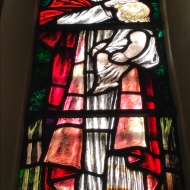 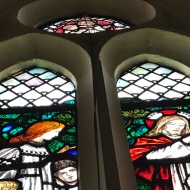 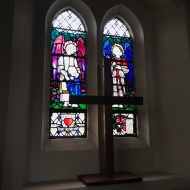 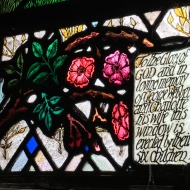 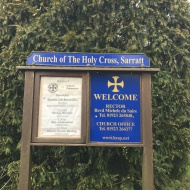 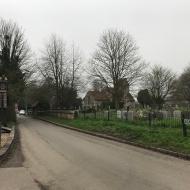 Whall was responsible for the “Charity” window in this church. It is the East window in the North Transept. The window dates from 1923. The Church dates back to circa 1190. Whall was responsible for two other windows, “St Cecilia” and “Bringing the children to Christ”. The “Charity” window comprises two lights featuring angels. There is a panel below each light and in the panel below the left hand light is a heart and below the words “Deus Caritas Est”. “Bringing the Children to Christ” is the earliest of the three windows and was installed in the West of the tower in 1913. It is a two-light window and in the left hand light we see a mother with two children. They look towards the right hand light in which we see Jesus with a third child. In a roundel above the two main lights, two angels are shown and the inscription “In Heaven their angels do always behold the face of the Father.” The window “St Cecilia” was installed in 1921 and is the South window, South Aisle. St Cecilia sits at a piano. The window was commissioned in her memory by the children of Emily Catherine Hamilton Ryley. (List of works by Christopher Whall)

And then, there’s the M25, always present, always humming, always flowing. Or trying to. 50 years it wasn’t. It might have a glimmer in a planner’s eye but when we were growing up in the area, the challenge that the M25 was to become and the traffic it would generate was beyond our imaginations.

We were able to ride our bikes through the narrow country lanes out of Heronsgate, around Chorleywood, down Solesbridge Lane and up to Sarratt without having to dodge lumbering articulated HGVs which had taken the wrong SatNav instruction and now found themselves squeezing through bushes and demolishing rabbit warrens before they were forced to reverse perilously, jack-knife and bring the whole of South East to a gridlocked halt. It’s amazing how one errant truck can take a wrong turning and seize up the nation’s supply chain.

In those days, Holy Cross Church in Sarratt would have looked very much like it does today – and probably how it looked like 800 years ago. Motorways may wax and wane but these older churches are made of hardier infrastructural policies.

But these days, the M25 helps you makes a trip to Sarratt by car in a hop skip and a jump and within minutes you can find the village’ s now empty duck pond, the Village Hall (scene of my first young farmers disco) and the Cricketers Arms (home of beautiful cobalt blue cutlery which is unfortunately not for sale).

A ten minute walk down Church Road – greeted politely by locals (“lost your way? You’re not from ‘ere are you?”) making it clear there’s nothing more suspicious than a couple of blokes walking down a country lane – leads unsurprisingly to the church, in which Christopher Whall is present, jostling for attention with the likes of Powell and Alfred Fisher. In the Baptistry, there’s St. Cecilia, patron saint of musicians, dating from 1921; in the Bell Tower, Bringing the Children to Christ (1913) and in the North Transept, Charity (1923).

Back outside, you clock that the Church of the Holy Cross  is opposite another pub, The Cock Inn, with its promise of ‘fab fish weekends’, which no doubt complement the fish and loaves Sunday mission of Holy Cross itself. The pub and the church: constants in an ever changing flux of articulated lorries, traffic diversions and speed cameras.