Train enthusiasts frequently get a bad press given their perceived tendency to loiter on railway platforms, camera in one hand, thermos in the other; but what the un-enthusiastic don’t know about the enthusiast is their ability to understand train behaviour in ways in which ordinary Joe or Josephine Commuter never sees in their normal hustle and bustle to work and all stations to Bletchley. Take a train’s kissing point for example.

If they’re timetabled to arrive simultaneously then the kissing point is around the central point of the platforms.  Most frequently kissing points occur at the end of platforms, hence the location of the enthusiast there, camera in one hand, thermos in the other. 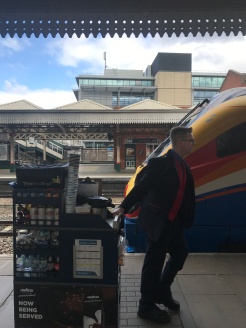 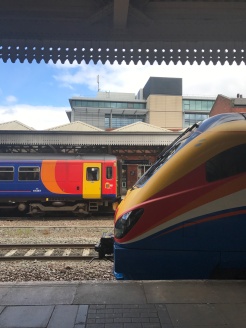 If you’ve not had the chance to see two trains kiss then you should find the time and enjoy what enthusiasts have known for nearly 200 years: there’s nothing as romantic as watching two trains approach each other, giving the impression initially that they’re about to crash into each other, only for them to gently glide by each other, having exchanged a tender kiss in the process.

This is why you hardly ever see enthusiasts at the side of the railway track deep in the remotest part of the country: not because it’s dangerous to get close up and personal to a Virgin Pendelino rocketing along at 150mph (although of course it is – very) but because its kiss with its oppositional cousin equates to no more than a smack on the jaw and a kiss to forget. Enthusiasts may wear ill-fitting anoraks and dirty brown loafers but they know a good romantic train moment when they see one and waiting patiently next to the high voltage line for two West Coast Pendolinos to cross each other isn’t one of them.

One of the most famous railway romances of course is the story of Trevor Howard and Celia Johnson in the film, Brief Encounter, which was filmed at Carnforth Station in Lancashire. All repressed emotion, unrequited love and surging Rachmaninov, Brief Encounter is nowt but a B movie to the full time enthusiast. They know that the real romance of the railways lays in the moment when trains kiss: moments of heightened suggestion brushing gently against thwarted reality which linger long into the memory well after the 17.47 to Bletchley has trundled on up the line to meet its maker.