It’s said that Barrow Upon Furness is built the wrong way round; the front of things are at the back and the back of things are on the front.  This is as true of Barrow Town Hall as it of much of its wider urban landscape: so a visitor who has been caught short and is looking for some quick relief will have a problem if they think they are going to find the toilets quickly through the front door.  Because the front door – the one through which would naturally walk – is actually the back door, and what you want to be doing if you’re really desperate, is use the back passage. 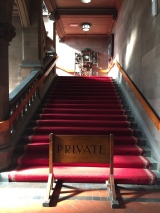 Barrow in Furness is also disparaged for being on the end of the railway line; at the outer edge of English civilisation and having the highest concentration of neurotics in the whole of the UK.  Whilst all of this is unfair and none of it true, what is true is that the toilets in Barrow Town Hall are hard to find: but once you’ve found them, they are quite a delightful experience.

The first thing the rushed visitor finds when coming in the back passage is a PRIVATE sign: which hardly encourages you to go any further.  But the hardy, desperate visitor ignores these signs and heads up the stairs and eventually sees the signs they are wanting to see and heads off in that direction with one sole intent in mind.

Once in the cloakroom (and the good burgers of Barrow have called it a cloakroom as opposed to resorting to a cruder nomenclature), the visitor can be delighted by the architecture and the efficiency of the water systems.

Relief is quick and efficient and on the way out, one gains a bit more understanding about Britain’s industrial past at the same time by being able to study and marvel at the history of UK submarine construction for which the town is rightly famous.

An OfSTED inspector once confided in me: if you really want to know a school, go and visit its toilets. And she was not wrong: for all the froth and razzmatazz that a school could muster when government inspectors came to visit,there would be many times they would forget to look after the basics of their children’s needs. Teaching and learning strategies? Tick. Attendance records? Tick tick. Behaviour modification programmes? Oh yes, tick tick tick tick tick. But the school toilets?

In many a shiny school I visited, the toilets were still left in a disgraceful state. Cubicle doors kicked in, toilet paper hanging off the light bulbs and the stench of urine never far away and always beckoning you to look for the next urination hot spot.

Things were made worse by some bizarre school policies which instructed children not to go to the toilet at all between the hours of 9.30 and 10.17 precisely: or only on a Tuesday: or only if accompanied by a gazelle. No wonder the poor dear’s little bladders went into convulsion the moment they joined big school.

So since then I have been alert to the promise of shiny schools and the reality of their crap houses. And the same thing applies to many civic monuments up and down the country and around the globe: the magnificence of the Taj Mahal, the promise of liberation at The Statue of Liberty or the spiritual communing at The Vatican promise so much but deliver so little in the way of public amenities. It’s like they all want to celebrate the nobility of human endeavour without acknowledging that every King, President or Pope also needs a crap once in a while.

Happily, this is not the case with St George’s Hall in Liverpool. That it is a major public monument of historical significance is indisputable; that it offers a thousand and one ways for the occasional visitor to engage with the City’s past is without question: but the real icing on the cake are the gents toilets which are modestly upholstered and a welcoming relief to the bombast in the Big Hall along the corridor.

Decorated with some fetching light blue, grey and cream coloured tiles which make the urinals feel like a glorified beach hut as opposed to the nearest pharmacist’s clinic, the space enables you to go about your business with a spring in your step and song in your heart.

Liverpool may well have won the European City of Culture Award in 2008 and spent millions upon millions of pounds upon its local artists such as Royal De Luxe and their splendid puppets, but what will linger longer in the memory at a fraction of the price are the toilet facilities of St George’s Hall,  for those of you who have got caught short at Lime Street Station and can’t pay? won’t pay! the 30p the station will charge you.

Nottingham Town Hall is a highly salubrious venue when it comes to visiting the city’s glorious past and the many artefacts that reflect its long industrial history. It sits in the pride of place of Market Square and naturally attracts a lot of street vendors, mobile tea and coffee units and neighbouring restaurants.

What is less known about Nottingham Town Hall is that it is home to some very comfortable gentlemen’s toilets.

You can sit down in comfort, wash your hands at ease knowing full well that there is clean hand towel nearby and there are even baby changing facilities in the same room as the urinals.

Some might baulk at the idea of this kind of adjacency but there’s no getting away from it: if you’re half inclined to be taken short whilst you’re in the middle of Market Square in Nottingham, heading over to the Town Hall will provide you with quick, reliable and comfortable relief in a way that the local McDonalds Fast Food outlet will never be able to.

There are endless restaurant reviews across the world, reviewing every edible thing from eggs to echidna and back again.  One thing they all have in common is that they review and comment on the facilities which involve putting food and drink of various quantities and qualities into the human being.

What they frequently omit to mention are the facilities which involve disposing of the waste products that emerge once those food and drinkstuffs have been processed by aforesaid human being: namely, the toilet.  Or WC. Or Crapper. Or John. Or Bog. Or whatever you want to call it in your home town or metropolitan lair.

This bog-blog is going to address those deficiencies by irregularly reviewing toilets (WCs, crappers, johns etc.) that one has had the pleasure or displeasure to visit.  It will, without fear or favour, name the guilty and praise the innocents when it comes to advising the world’s public about which toilets (WCs, crappers, johns etc.) to use and which to avoid like the plague, just in case you stand a chance of catching nasty from the water system.

Watch this space… but don’t stand too close, just in case.