My mum, daughter and I had just arrived in Schwarzenbach to visit the Erika Fuchs Haus, named after my god mother and my mum’s aunt, Erika Fuchs, who used to send me ten Deutsche Marks annually for my birthday which was quite a tidy sum for a youngster back then.

In those days I was completely oblivious to her work and much more inclined to follow The Beano. But I was rapidly brought up to speed some 50 years later when being introduced to the museum by its head, Dr. Alexandra Hentschel, and private collector, Gerhard Severin.

After being introduced to a multimedia history of comic stories and graphic novels in a darkened studio, a side door opens and a bright green gallery of the country of Entenhausen and all the Disney characters greets you in a sunny, shiny green lively reveal which made us all go ‘wow’ in unison.

Gerhard showed us an interactive map of Entenhausen which looked simultaneously plausible and impossible and which prompted my question of whether or not Entenhausen was fictional. His response of “No, it’s real – we just don’t know where it is yet” struck me as the perfect riposte to those of us who struggle with whether stories are fictions, whether fictions are facts, whether facts are fictions, and all those impossible questions about what constitutes real worlds, unreal worlds, truths and falsehoods.

It’s also a great antidote to those who tell you, in these post-Brexit times of ‘There is No Alternative‘ in the UK, that there is a very real, viable and tangible alternative: we just don’t know where it is yet. 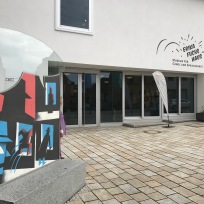 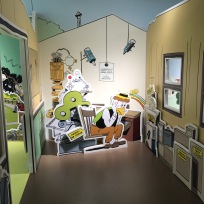 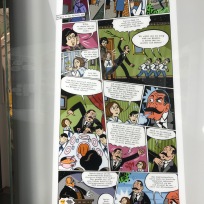 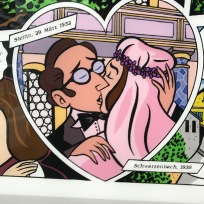 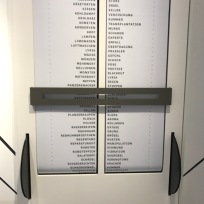 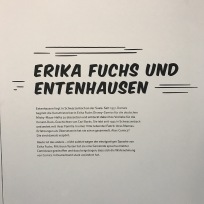 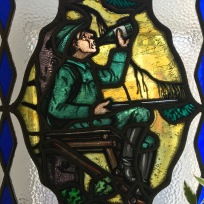 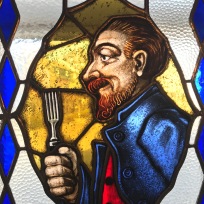 As well as enjoying the museum we were also fortunate to encounter the stories of the stained glass windows in the restaurant of our accommodation, the Hotel Strauss in Hof.  They provided a comic contrast to Erika’s work, simultaneously conjuring up the work of Carl Orff’s Carmina Burana and playing against the religious symbolism of the Whall windows I’ve been visiting across the UK.

Many personal and family stories revealed themselves over the following days and helped place various pieces of the missing family jigsaw into the relevant slots in the bigger picture: whether they are actually truth or fiction is an ongoing question which will require a few more visits to Schwarzenbach and its homage to the work of my mysterious god mother and Great Aunt, Dr. Erika Fuchs neé Petri.