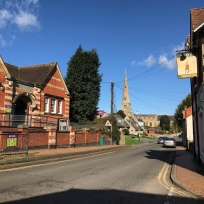 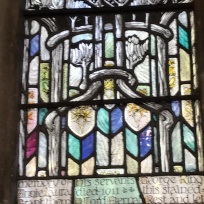 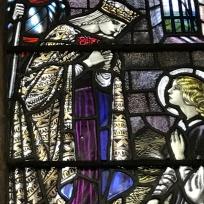 The story of St. Katherine of Alexandria 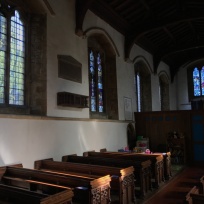 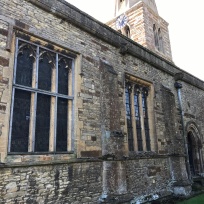 It’s the first trip of the mini-pilgrimage to visit St. Catharine’s Church in Irchester, near Wellingborough, and to see Veronica Whall’s window which depicts the life and martyrdom of St. Catherine of Alexandria.

I take an East Midlands Trains from Nottingham to Wellingborough, a walk into the town centre and finally collect the X47 Bus from Swangate Centre which takes me directly to Irchester, dropping me literally onto the doorstep of the Vicarage. The Revd. Caroline Lucas is up at the church at the time, holding a bible study class on the Beatitudes and when I get there, there’s a low murmuring discussion about the complexities of turning the other cheek in times of conflict.

The patron saint of the church, Catherine of Alexandria, would have been an exemplary model of turning the other cheek. She was was the daughter of Constus, the governor of Alexandrian Egypt during AD286 – 305. When the persecution began under Maxentius, she chastised him for his cruelty to Christians which led to her being condemned to death on a spinning wheel into which a load of knives were set (the origin of the Catherine Wheel firework) but miraculously she was spared this agony – only to be later beheaded by Maxentius who clearly knew nothing about turning the other cheek.

Caroline tells me she’s been nominated as a pioneer vicar. The town is in the process of building a new community in Wellingborough, Stanton Cross.  This will see homes for 10,000 people, three new schools and all the associated infrastructure being built: and her role is to offer pastoral and spiritual care for all the folk who would make Stanton Cross their community and new home.

She’s not going to have a church building to work from – and whether the new infrastructure will extend into providing stained glass window design lessons across the curriculum is debatable – but it will be interesting to come back later to see how Catherine and the Church have managed to build a sense of community and belonging in to what is currently a sprawling building site next to the railway station.

Let’s hope the planners don’t forget that roads and railways are one thing: but that it’s culture, diversity and mutual respect that binds people into community.